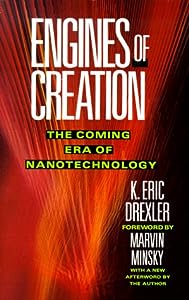 Look out!  The nanobots are coming.

Little by little, nanotech is losing its sci-fi image of being the science that risks the earth being devoured by grey goo!

For anybody who wants to know more about nanotechnology, it’s well worth watching this video by Dr. Richard Jones, Pro-Vice-Chancellor for Research and Innovation at the University of Sheffield.

It’s quite a long video, but gives an informed and balanced view of the science and its implications that’s accessible and easily understood by the layman.

He discusses the origins of the science from physicist Richard Feynman’s description of a process of manipulating individual atoms and molecules.

He also talks about Eric Drexler’s book, “Engines of Creation” which was a controversial but influential vision of nanotech and has informed the subject as it has appeared in the popular psyche.

Scooby Doo and the Naysayers

Jones goes on to describe Prince Charles’ warnings against the technology and deliberate attempts by US environmental protestors to frame the science as meddling with the basic structure of atoms and, therefore, life itself.

The video gives the low-down on nanotech and Jones is quite a witty guy.  He discusses how the science has been a fertile field for science fiction and how he’d recently watched an episode of Scooby Doo in which he discovered that Scooby Snacks contain nanobots that are used for canine enhancement!

The future of apps is not apps: it’s nanoplatforms

Unlikely tale of a bike created by twiddling three buttons

Which new technology market is expected to reach $177 billion in five years?