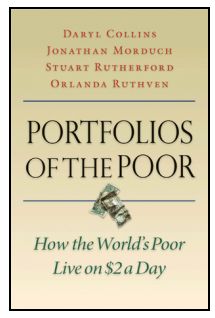 A wealth of innovation opportunities among the poorest on the planet

And you thought shopping was exhausting: necessity forces these ‘dollar or two a day’ people into an unimaginably intricate daily web of cash and credit

Veteran poverty remediation and microfinance advocate professor Stuart Rutherford (author of ‘The poor and their money’) and his colleagues have come up with a formula for the next generation of financial tools for those handling microscopic amounts of money.

When I was still an architectural student, I took some time out working for an economic research organisation in Nicaragua, just after the 1972 earthquake that devastated the capital, Managua. I spent days in the shanty towns talking to poor people, and I became aware of something that I previously had no idea about at all – the ways in which they manage their money. I came across moneylenders and pawnbrokers and savings and loan clubs and many other curious and ingenious devices and was immediately fascinated.

Stuart Rutherford in The Browser

Whilst it’s hardly a surprise to learn that these people, in places like Bangladesh and in Southern African slums, don’t always manage their meagre funds satisfactorily, the most surprising finding of Rutherford’s research is that they tend to manage those funds much more actively, with a much richer range of sources, instruments and transactions than those with more money.

The poorest of the poor communities in the world are much more likely to need to interact minute by minute with their potential sources of income, typically experiencing a significantly more ‘real time financial culture’ in their ‘informal economy’ than we do in our more formal one.

They lend, borrow and barter at least as often and intensively as we shop.

There seems to be much more room for innovation (how, for instance, could we/should we develop the mutual financial support culture that they have: what are they doing collectively and collaboratively which is worth copying or adapting?) than even these researchers talk about.

They are all on video talking about a new book called ‘Portfolios of the poor’.

Portfolios of the Poor Part 1

Portfolios of the Poor Part 2

Portfolios of the Poor Part 3

Portfolios of the Poor Part 4