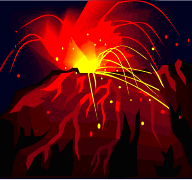 Will spoilt holidays and disrupted travel become a thing of the past?  easyJet hopes its new technology will allow travellers to keep on flying, despite volcanic eruptions like the one earlier this year

They even claim that they plan to share the technology with other airlines, so they don’t seem to be treating this innovation as a competitive issue :

Flying in the face of travel disruption

It seems like the opportunity to be stuck in some idyllic location  may soon become a thing of the past.

The disruption caused by volcanic ash in April of this year was seen as a nightmare by some who struggled to get home at all costs, but was welcomed by others who were content to kick back and prolong their holidays (those lucky enough to be able to afford it).

The following press release by easyJet (4 June, 2010) promises to make this sort of delay a thing of the past:

easyJet will be the world’s first airline to trial a new technology called AVOID (Airborne Volcanic Object Identifier and Detector).

“This pioneering technology is the silver bullet that will make large-scale ash disruption history.   The ash detector will enable our aircraft to see and avoid the ash cloud, just like airborne weather radars and weather maps make thunderstorms visible.”

The system, essentially a weather radar for ash, was created by Dr Fred Prata of the Norwegian Institute for Air Research (NILU).

AVOID is a system that involves placing infrared technology onto an aircraft to supply images to both the pilots and an airline’s flight control centre.

These images will enable pilots to see an ash cloud up to 100 km ahead of the aircraft and at altitudes between 5,000ft and 50,000ft.

This will allow pilots to make adjustments to the plane’s flight path to avoid any ash cloud.

The concept is very similar to weather radars which are standard on commercial airliners today.

On the ground, information from aircraft with AVOID technology would be used to build an accurate image of the volcanic ash cloud using real time data.

This would open up large areas of airspace that would otherwise be closed during a volcanic eruption, which would benefit passengers by minimising disruption.

The ash detector will enable our aircraft to see and avoid the ash cloud, just like airborne weather radars and weather maps make thunderstorms visible.”

Dr Fred Prata, Senior Scientist at the Norwegian Institute for Air Research (NILU) and inventor of the AVOID system added: “AVOID enhances the theory around volcanic ash clouds with live data.easyJet is committed to bring our technology to life.”

Commenting on today’s news Andrew Haines, Chief Executive of the Civil Aviation Authority said “It is essential that the aviation community works together to develop solutions to minimise disruption, should ash return.

The CAA welcomes the fact that airlines are considering innovations such as this and we will do all we can to facilitate them.”

The first test flight is to be carried out by Airbus on behalf of easyJet within two months, using an Airbus 340 test aircraft.

Subject to the results of these tests, easyJet intends to trial the technology on its own aircraft with a view to installing it on enough aircraft to minimise future disruption from ash.