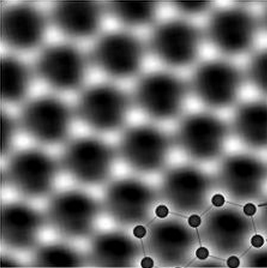 Francis Pearce, 12 years ago 2 min read 1957
Dutch researchers have explained how graphite, an allotropic form of carbon, acts as a ferromagnet.  The discovery could pave the way to its use as in biosensors, smart materials and applications of spintronics.

Graphite comprises strongly bonded sheets of well-ordered atoms (graphene) but the bonds between sheets are weak, hence its usefulness as a lubricant and in pencils. Jiri Cervenka and Kees Flipse (Eindhoven University of Technology) and Mikhail Katsnelson (Radboud University Nijmegen) say electrons in the 2-nanometre boundaries between sheets behave like those in iron and cobalt so it is not ferromagnetic material trapped in the graphite that causes the effect, as had been thought.

Original graphene team sees it as a ‘goldmine’

A team at Manchester University led by Dr Irina Grigorieva and Professor Andre Geim is working on a three-year, £440,000 Engineering and Physical Sciences Research Council-funded project investigating the physics and technology of graphene, which it discovered in 2004.
In its application for the EPSRC grant it said: ‘Graphene has now become a real gold mine for searching for new fundamental phenomena, and it also offers numerous applications, ranging from smart materials to future electronics’. It added: ‘Theory predicts a whole spectrum of magnetic phenomena in graphene, including several mechanisms for intrinsic ferromagnetism and spin-ordering’.

Contamination can now be ruled out

Graphite from meteors is known to be ferromagnetic at room temperature.In 2002 a team from Trinity College, Dublin studied samples from the Canyon Diablo meteorite to try and explain why its iron content could account for only two-thirds of its magnetisation. However, at the time, it concluded that the ferromagnetism resulted from the magnetite or kamacite inclusions and was not intrinsic to graphite.  But Graphene’s simple structure has now helped rule out contamination as a source of the magnetism.

The impact of women in the boardroom