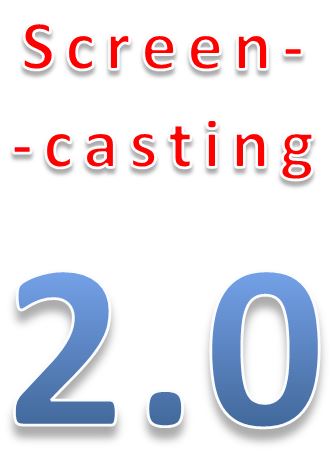 Screencast videos are almost all painfully harder to watch than they need to be: here’s our top 5 suggestions for making screencasts infinitely more watchable, mostly just by adding a little bit of post-production.

There are many thousands of screencast videos being uploaded (mostly onto YouTube) every single day.

This article is mostly aimed at addressing the fact that the screencasts have been ‘put in the public domain’ and that this is something which opens up an important but almost totally disregarded opportunity to provide a much more attractive and accessible resource for the casual, uninitiated, hitherto uninvolved but curious video viewer.

Failing to take the casual viewer into account may not just be a missed opportunity, it could be seen as reckless disregard for the sustainability of a precious resource

This kind of improvement offers the potential benefit of both enhancing the ‘branding impression’ of the screencast ‘publisher’ as well as constituting potentially valuable outreach for their work, not to mention being a ‘better citizen’ of the online video publishing community.

Contributing to the ‘pollution’ of the available corpus of publicly available videos with unnecessarily unwatchable material could be considered to be irresponsible: doing so can significantly undermine the experience of those who will find your video, either in the results of a video search or in the ‘suggestion stream’. If we recognise the benefits of having the ability to publish video for free, we should probably consider treating this resource with respect.

The extra effort involved in making a screencast more ‘non-participant friendly’ may be small, but it is still much more that ‘just putting it up on YouTube’, so the question it raises is ‘do we want to get more out of this screencast’: if the answer is yes, then in addition to the issues raised below, raising awareness of the existence of the video (once it has been made more watchable) will become part of the value determination equation.

Audio conference-based training captured on screen, then released without much further thought to an unsuspecting world

These are often recordings which are just ‘screen captures’ of ‘live sessions’ which are essentially ‘conferences’ recorded on VOIP-based software like Skype or on dedicated video conferencing systems.

Unsurprisingly for what is likely to be an ‘educational exercise’ conducted by an organisation, the sessions are usually in a ‘tutorial’ format, where a presenter gives a talk to a bunch of live attendees, with visual aids (sometimes involving a demonstration of some software on screen) allowing the presenter to illustrate their talk.

It’s a weird, disembodied, often unwelcoming experience if you just happen to click on one of these strange-looking videos out of curiosity or by accident

Often other ‘live attendees’ are often audible in the background, perhaps asking questions or making comments. Sometimes, however,  the screencast audio contains nothing but the voice of the presenter throughout (sometimes these sessions are called ‘Webinars’ or ‘Webcasts’)

This kind of video has often been put up on YouTube so that others associated with the material (such as those in the same organisation who were not able to attend the live session) can watch it.

You’ll wish you hadn’t clicked: surely that can’t be good for anyone

Screencast videos, in their ‘raw state’ always look and sound awful, as if they were only ever meant to be watched by those who were directly involved, but they don’t need to look or sound that bad.

Irritatingly bad sound is one of the most common reasons why a casual viewer will quickly ‘back-out’ of watching a video that has piqued their curiosity. Screencast audio almost always sounds atrociously low-fi if it is recorded off the VOIP system that was used to do the original live screencast

This is something which inevitably tends to make the video far less inviting to the uninitiated, curious or casual viewer who encounters it while browsing or searching for videos on a particular topic (or who clicks on it when it has appeared in the list of ‘recommended videos’ which are presented when you select a video to watch on YouTube)

Use a camera (even if you don’t need to)

Even though the screencast’s content is all in an ‘on screen’ and/or ‘slide deck’ format, it doesn’t need to be: Use a (preferably high definition) video camera/camcorder placed on a tripod, pointing in a strategic (evenly lit) direction in the presenter’s room (far better than just using a webcam only showing a continuous close-up of the presenter’s face). The video of the presenter can be ‘inset’ as a ‘picture-in-picture’ window which can be overlaid onto the screencast recording when the video is being edited and, more importantly, can be used ‘full screen’ at the very beginning to introduce the screencast video

This is something given verbally to the participants at the start of a live screencast which may be perfectly meaningful to them, but may be utterly unintelligible and meaningless to any non-participant viewer who only watches the recorded video and is not associated or familiar with the organisation which put it up

Verbally introduce the screencast (preferably with a video of the presenter giving the introduction, see 2 above) in a manner that is clearly aimed at explaining the context of the material to those with absolutely ‘no prior knowledge’ of the background to the live session.

Remember to be clear to the uninitiated viewer about the experience/knowledge/skill level of the live audience.  This opens up the possibility of turning what may seem to be an unappealing-looking screencast into a potentially riveting educational video. You have a good chance of producing some seriously grateful devotees

Invite a live ‘audience’ to sit in the presenter’s room and appear in the live video (once again, see the camera issues in item 2 above). Even if all the other live, audible screencast session attendees are ‘remote’, seeing at least one individual visibly interacting with the presenter ‘live in the studio’ can ‘humanise’ the video, drawing attention to its compelling sense of liveness (an attention-getting asset which can be lost in a screencast video which seems as if it isis ‘mostly just the presenter talking’) and make it much more watchable

No visible supporting material or follow-up

Screencasts assume that ‘live attendees’ will have access to all the relevant written material associated with the screencast content (usually on the organisation’s internal ‘Intranet’ where other internal training material is made available) so there is often nothing helpful included ‘below the video’, however, the casual, uninvolved, but curious video viewer will not have awareness of, or access to the relevant written material. They will inevitably feel seriously excluded: is that really what you want?

Put a brief written introduction, summary, links and contact details below the video

Include links to other written content and to related screencasts, thereby making the material ‘behind’ the screencast video ‘casual viewer friendly’: why not even offer them some incentive and means to give feedback and even join in on the next screencast, or screencast series (maybe as part of the the ‘studio audience’, see item 4 above)?

Turning churnalism back into journalism

'How to', Global View, Innovation & Strategic

Customers as community: dangerous yet necessary