> Global View > UK > Should government turn everything it doesn’t want to do into a startup? 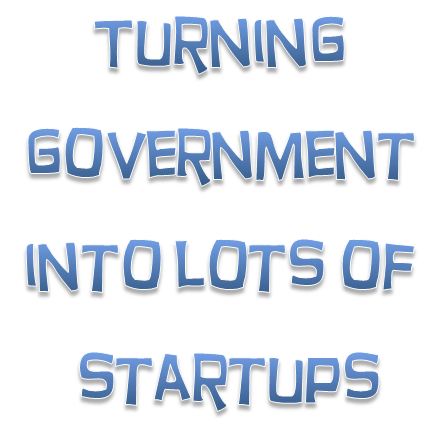 Government is understandably fed up with being blamed by society when it doesn’t handle things perfectly, so it wants to be seen to be handing at least some of the responsibility for doing things back to society, but…

The catch is, governments want society to take up this new role without being offered any incentive other than the conferring of ministerial blessings upon whatever it might be that motivates people to do things other than work in paid employment.

So, what kinds of thing fall into this category?

Government, for instance, may be prepared to contemplate the prospect of things like public libraries being allowed to fall outside of the remit of taxpayer funding.

So, if it turns out that there is a demand for libraries, but that the demand is not sufficient for there to be a ‘social imperative’ (for continued public funding) or a ‘commercial opportunity’ (for privatisation) it would seem that libraries might fall into the ‘big society remit’.

Public libraries, being seen as not likely to be ‘suited to privatisation’ would either go from the public sector to the ‘not for profit’ sector, or (more likely) into oblivion.

This would be because the government felt that current lack of demand meant that government subsidy was impossible to justify, or instead that government was unable or unsuited to run (or stipulate the provision of) libraries, at any cost.

Instead of the predictable cry of ‘any takers?’ aimed at the voluntary sector being met with a stony silence, we might ask what the startup accelerator scene (that recipient of so much recent government enthusiasm and media hubris) can offer the beleaguered ‘third way’ brigade, in terms of rescuing the service in question?

With our startup acceleration hats on, we would need to say that this situation was ripe for what Steve Blank might call a ‘business model discovery’ exercise.

This exercise would in this context be aimed at determining whether there was a new business model ‘out there’ for such things as libraries.

The term ‘business model’ in this case is (obviously?) not just restricted to ‘commercial operation’ but could also include:

Considered on the grand scale, if this business model discovery approach proved successful, it could be applied as an ‘audit process’ for every government activity ‘up for reconsideration’ whether for privatisation or ‘big societisation’.

Instead of the current ‘should it be public or private?’ question (and if the answer to both options is ‘no’ then the service in question would these days have been considered as being a ‘big society’ option) the entire traditional approach to ‘public service reform’ could be scrapped.

It would instead be replaced by a requirement to ‘hand it to the public service startup accelerator’ who would subject it to a far more unfettered and imaginative business model discovery process than any government committee has ever undertaken.

Government disrupting bureaucracy instead of creating it? The very idea!

Yes, of course I can see the need for just as much (or probably even more) creativity when devising safeguards (the hungry startup investment fund wolves would soon be slavering at the accelerator’s door) but it still sounds worth exploring.

Can you get sustainable power stations for nothing?

So how does a leading VC defend optimism in a crisis?

Major debate video: Is ‘who we are’ more than just brain-wiring?