> Technology > Car healthcare arrangements? Incredibly better than our own 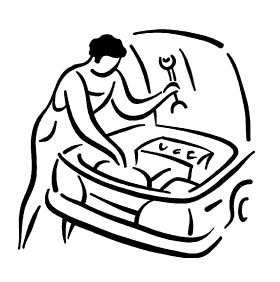 Car healthcare arrangements? Incredibly better than our own

From the ‘innovation priorities in serious need of attention’ department

This isn’t a story about cars, except as a basis for comparison: you probably already knew that your car is absolutely full of sensors which can provide a wealth of historical data which is only accessible when the folks who have to service it hook it up to their laptop.

The intimate social media of every modern car

The car repair technician needs to know exactly how much wear and tear there has been in order to know what to adjust or replace.

These days, your car’s detailed, silently compiled ‘driving experience blog’ can instantly tell the manufacturer’s online systems how the current condition of every single critical component in your vehicle compares with a database containing the history (and longevity) of that very same part in every other automobile that has ever been serviced using the manufacturer’s diagnostic software, anywhere in the world.

This technology makes a world of difference to the practicality of keeping a car in a safe, reliable and economically viable condition for as long as possible.

But when most of us visit the doctor’s surgery, somehow we manage to content ourselves with the fact that the clinician is likely to have about as much insight into how our lifestyle has contributed to the state of our health as someone over a century ago attempting to work out why that recently purchased Model-T hard started to emit a strange noise when the engine started.

How on earth have we somehow managed to endow that box on wheels with a space-age health care system which brings all the power of the Internet to bear on the need to replace a worn-out sprocket and yet, at the same time, for some reason, we have absolutely no problem with the fact that we consign the fate and wellbeing of ourselves and our families to someone whose entire knowledge about everything that’s happened to our bodies since our last visit to the surgery is confined to what we can tell them in a ten minute conversation?

So, with all those requirements that we have learned are necessary to keep a car healthy, it turns out that when technological progress has made it possible to address those requirements, we have implemented systems just as soon as we could and as a result, millions of cars now benefit from such improvements.

But the job of even attempting to systematically record individual human activity for healthcare purposes has a level of take-up that is many years behind that of cars.

The fact that human bodies are incomparably more complex (and poorly understood) as machines and that our activities are infinitely more diverse (to put yourself in the right frame of mind to appreciate that particular problem, just for a moment compare the diversity of our fuel intake with that of a car) may sound like a perfectly convincing excuse for a comparative lack of progress, but those engaged in using various currently available ‘self-tracking’ technologies might find such sentiments unrealistically defeatist, if not downright complacent.

Genomics: the engine of change for health-driven tracking?

Such recent technological developments, coupled with rapid progress in genomics, promise a potential revolution in human healthcare, which suddenly finds itself in what appears to be a desperate race to catch up with the humble horseless carriage.

Someone eminently qualified to draw all of the many threads of this topic together from both a personal perspective (he’s one of the world’s most written about advocates and practitioners of self tracking) and from a deep and abiding interest and involvement in all the relevant science and technology is the legendary Internet pioneer Larry Smarr.

Here’s a news release from March 2012 which covers issues raised by Larry in the talk above:

The California Institute for Telecommunications and Information Technology (Calit2) has announced a partnership with Quantified Self, an international collaboration of more than 7,500 “self-trackers” who record and monitor personal data using a combination of low-tech and high-tech tools and devices.

Calit2, which has divisions at both the University of California at Irvine and at San Diego, has become a ‘friend’ of the Quantified Self (QS) community and will likely become a testbed for some of the technologies that QS members develop and use to monitor their work, sleep, exercise, diet and mood, as well as a visualization laboratory.

“Combining the deep research in Calit2’s Digitally Enabled Genomic Medicine thrust with QS’s early adopters should benefit both groups,” said Calit2 director Larry Smarr, who is himself a “self-quant” and was recently featured in the MIT Technology Review and the San Diego Union-Tribune.

“One of the barriers for ‘citizen quanters'” added Smarr, “is lack of access to frontier university research. This is a step toward removing that barrier.”

For more than a decade, Smarr has charted a wide variety of biomarkers and greatly improved his health using a suite of personal sensing and medical tracking technologies. Such technologies are becoming increasingly available, and increasingly popular.

The traditional pedometer, which counts steps and calories burned, has given way to more advanced devices, such as the FitBit, Body Media, and Nike’s FuelBand, which use accelerometers and altimeters to measure activity levels and sleep patterns and can communicate with smartphones.

Smarr and a number of self-quants have gone further to measure their DNA and blood and stool samples. Once self-quants have collected a dataset, they can then network with other users via sites such as QS, 23andme, Zeo, PatientsLikeMe, or CureTogether, where they can share information about symptoms and treatments for hundreds of conditions.

Consequently, there is an exploding amount of data available per person and a rapidly growing number of quanters sharing that data. Calit2’s partnership with QS comes on the heels of the duo’s successful ‘Future Health’ panel discussion, which was held at Calit2’s UCSD headquarters in Atkinson Hall last month and featured Smarr as a speaker, in addition to QS founder Gary Wolf, UCSD cardiologist Dr.

Eric Topol, and Joseph Smith, the chief medical officer and chief science officer of the West Wireless Health Institute (WWHI was also a sponsor of the event). Their wide-ranging discussion examined the dramatic shift affecting health and healthcare as personal sensing and medical tracking technologies put health data in the hands of patients themselves and shift the focus from ‘healthcare’ to ‘health.’

Since its inception in 2000, Calit2 has been home to several research centers, laboratories and federally-funded projects in the emerging area of wireless healthcare, and in 2010, Calit2 announced that its “path forward” would include health as one of four key research “thrusts.”

One manifestation of this emphasis on research into health is the Center for Wireless and Population Health Systems (CWPHS), which is based at Calit2 and oversees 20 research projects pertaining to the relationship between wireless and networked technologies and health outcomes.

Its ongoing ConTxt study, for example, is looking at the ways mobile text messaging can improve weight control, while its PALMS (Physical Activity Location Measurement System) project uses various sensors to capture heart rate and GPS data, as well as pollution counts, to recommend the optimal location for physical activity.

Calit2’s division at UC Irvine has also pursued a number of research projects pertaining to health, including its LifeChips Program and its eHealth Collaboratory.

The institute’s eHealth Collaboratory allows researchers to pool their multidisciplinary expertise in disciplines such as telemedicine, mobile operating systems, wireless solutions and micro- and nano-fluidics, to name a few.

Calit2 is also renowned for its cutting-edge visualization technologies, such as the VROOM virtual room and the immersive virtual reality StarCAVE, which make it possible to analyze vast quantities of data at high-resolutions, even in 3D.

Ernesto Ramirez, a research scientist at CWPHS and the community organizer for QS, foresees a time when researchers at Calit2 will mine data gathered by QS self-quants in order to digitally visualize trends, patterns and connections.

“People love, for example, taking pictures of their food,” explains Ramirez, “but there’s no real easy way to understand how good or bad your diet is just by taking pictures.

There’s huge power in being able to look at large amounts of large scale longitudinal data, and Calit2 researchers from the Visual Arts Department are interested in making sense of images.

They might use basic color processing to detect vibrant colors in a person’s diet, which might tell them how many fruits and vegetables they eat.”

Ramirez, who spends weekdays in Atkinson Hall burning calories while working at a self-designed “active desk,” says he also envisions a partnership where faculty, staff and students at Calit2 will wear self-tracking devices as they go about their workdays, building platforms for managing the data and in some cases even tapping their engineering skills to modify or improve the devices for the larger user base.

He cites his work with iDASH – a joint collaboration with Calit2 that will develop new algorithms, open-source tools, computational infrastructure and services for biomedical and behavior researchers – as another project ripe for collaboration with QS.

Says Ramirez: “Calit2 across both universities is an amazing innovation lab. Those who work at Calit2 self-identify as people who like playing with technologies and integrating them into their lives. But more importantly, its multidisciplinary, collaborative environment is the direction health research is headed.

We’re moving to a place where researchers are going to stop getting degrees in public health and behavior and instead get broader experience working with computer scientists, cognitive scientists and the like. “The researchers at Calit2 are already doing this,” he adds.

“The potential ways Calit2 can collaborate with QS could lead to some amazing new developments in health and healthcare.”

Love: the most important thing about startup founder matching

US dominates BBC list of net entrepreneurs who made it