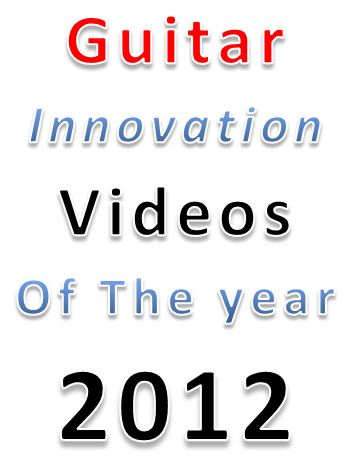 Yes, you’ll find some pretty lame excuses for also including some (admittedly awesome) clips which are sometimes more about exceptional inspiration than innovation

One of Boscoe’s DIY guitars glimpsed on a shelf for a few seconds (at 0:56, best appreciated in HD) in the video looks so incredibly roughly-crafted that playing it in a public place without appropriate shielding would probably constitute an unacceptable health hazard for an audience unwittingly exposed to a serious risk of being caught in a shower of wickedly sharp splinters.

The legendary Allman Brothers alumnus Trucks finds his inspiration from other regions and quite different genres of the sub-continent, somehow managing to successfully imbue them with a kind of country blues rock feel.

It’s not so much the talking or the teaching in this video, it’s the playing: just like Boscoe, Joe (who like Derek above, has strong Allman brothers connections) does an extraordinary (but quite different) slide version of Amazing Grace, but then he segues it seamlessly into the opening bars of his hit Rocky Mountain Way: the whole thing is quite astonishing.

Critics of his technique (yes, avid guitar video devotees all know only too well what YouTube commenters can be like) might complain that much of this number is mostly open string (i.e., not technically demanding enough for them to be impressed: watch the video yourself and scratch your head) but the point is that at times in this performance he somehow manages to sound like an entire ensemble of rhythm, bass, lead and percussion (but without the use of anything electronic: it’s an acoustic set) and yet the sounds all seem to be quite ‘natural’ and ‘clean’, all whilst playing solo in a vast indoor auditorium in front of a big audience: it’s as much an innovative acoustic achievement as anything else.

OK, so few dispute the claim that the notoriously disco-beat desecrated ‘hooked on classics’ was unquestionably ripe for merciless parody, or rather that it inspired Brian Eno to playfully orchestrate a gloriously farcical travesty of the ‘great works’ perpetrated by the utterly forgivable, but not forgettable Portsmouth Sinfonia, and its also a heck of a long time since pianist Jaques Loussier memorably jazzed-up Bach for cigar ads, so perhaps the time is right for someone new to give Beethoven and Mozart a fresh and inventive Latin swing treatment (with just a hint of 50’s surfing style rock and roll thrown in).

It’s an absolutely unbreakable tie between:

This choice is made for no other reason than to provide an unambiguous example of just how to do exemplary guitar equipment reviews.

Sure, he’s unashamedly opinionated, but in a way which adds a wealth of additional value, insight and context to the review.

His playing fully illustrates many of the capabilities of the product being reviewed, and the device itself has an interesting enough range of features to merit being explored in this level of detail.

From an innovation perspective, it turns out that Chapman’s guitar-building company was the first to design its guitars “collaboratively”, and the design, features and even the price of new models are selected by the votes of Chapman’s YouTube subscribers in online polls on his website.

No real need for any justification on picking this one, just watch the video to see why it deserves to be up there with the Chappers one above, even though it is essentially an ‘in-house introduction’.

It just makes you seriously want to try one out for yourself, which is the essence of a good review of a genuinely interesting piece of kit.

In a way, this is actually quite a strange choice: there are plenty of other great guitar tutorial videos out there, and I dare say there may even be many which do an even better job of tutoring whatever they happen to be tutoring than this one (although there’s nothing obviously particularly wrong with the tutoring here, in fact it’s pretty inspiring, so maybe not, but as you’ll see, that’s not the point).

The award in this case, is given because, when the overdrive is switched off, and the points Guthrie is making are all illustrated in ‘clean’ tone, you are suddenly exposed to a level of accuracy and fluidity which I would be truly surprised if others can match, notwithstanding all the credit that he generously gives to Alan Holdsworth.

Holdsworth himself tells us quite emphatically (in this video) that he was never attracted to the idea of becoming a guitarist at all and he much preferred saxophones, which is how the whole Holdsworth-initiated guitar-legato and guitar-synth thing actually got started.

He always wanted the guitar to play and sound nothing like a guitar: somehow I suspect Guthrie’s relationship with guitar playing is (at least) just a bit more straightforward than Alan’s: it is reasonable to infer that the big attraction to legato which was popularised (but not invented) by Frank Gambale is nothing more than speed, despite widespread, almost ubiquitous protests to the contrary.

Despite Guthrie’s ‘heretical’ advice to ‘slow down’, he’d probably be the first to admit that he’s often no less guilty of that very same transgression.

In fact, despite the existence of such bizarre phenomena as ‘guitar speed records’ (which I wouldn’t be at all surprised if Guthrie viewed with disdain) you could be forgiven (after watching this video) for imagining that he would probably easily win if they somehow managed to put together a ‘speed and complexity record’.

Guthrie’s fingers have, as you can clearly see in this video, an ‘obedience level’ which just seem to go right off the charts (submissions for competing contenders should be put in the comments).

Unfortunately, once he switches back on the overdrive (as can be seen in his other videos) there are countless other players whose skill level, despite most of them almost certainly being significantly lower than his, sound deceptively similar: fuzzy shredding is a great leveler.

All those interesting and highly developed subtle nuances that he demonstrates here with crystal clarity seem to get completely drowned out in endless storms of tightly packed fuzz-and-feedback-toned arpeggios.

It was only the use of clean tone mode in this video which revealed not just astoundingly flawless accuracy and speed but unexpected delicacy and sophistication that would otherwise have remained entirely hidden to all but those trying to replicate them.

Oh, no! The video that I originally embedded here is no more!

Here’s another which probably illustrates the phenomenon that is Guthrie Govan even more dramatically.

Stand by: this is a platform alteration announcement