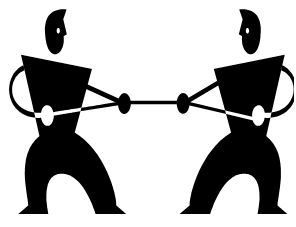 An epic transatlantic on-air wrangle over Google’s future. Veteran BBC innovation investigator Peter Day vs. US prediction guru Mark Anderson. They each put up a characteristically robust performance. But who won? Whatever, it was riveting radio.

What seemed to produce the sharpest discord (at 12 mins 44 secs) was this question: has Google lost its way? These two are renowned for asking tough questions, and neither pulled any punches: Mark Anderson felt that investors should be concerned about Google’s innovation strategy but Peter Day proved hard to convince that their approach wasn’t beneficial.

This wasn’t the only aspect of the show which produced strong differences.

It may have been good-natured, but neither side seemed prepared to take much that the other said without seriously challenging it. For example, when it came to Anderson’s prediction that this would be a breakout year for electric cars, it was Peter Day who was expressing the scepticism (‘all promise and no delivery’) at Anderson’s optimism about electric cars, which Day said he had heard Anderson express repeatedly over the (many?) years that this annual ‘Anderson’s new year prediction interview‘ has been broadcast by the BBC (to the world’s largest international radio audience on the BBC World Service).

Anderson (who runs a newsletter called the Strategic News Service) talked about quite a bit more: he feels that the apps market is due for a shakeout, with free and minimal-cost apps producing a bubble burst that will leave only those with sustainable business models (where revenues can at least cover ongoing support costs) and the rest will disappear.

This seems to indicate that Mark may not be convinced of the (Stewart Brand of Whole Earth Catalog and WELL) doctrine that information (at least when it is delivered in the form of an app) ‘wants to be free’, but, surprisingly perhaps, he does feel that way about electrical power: remember the iij article about how the German solar power incentivisation initiatives were ‘too successful’: their government had encouraged householders to install solar panels and allowed them to get paid for feeding any excess electricity back into the grid.

This produced such an unexpectedly enthusiastic response that the resulting ‘incoming’ domestically generated electricity overloaded the central electricity grid. What Mark seems to be implying is that Germany’s experience indicates that ‘domestic solar’ is likely to be massive in the US.

Electricity, once you’ve sorted out your grid so that it wouldn’t get overwhelmed, does look as if it just might have the potential to be free (for the end user, once they had covered the cost of installing any solar panels that they had to pay for). In fact, maybe it will turn every home into a startup, selling power back to the utilities.

Maybe this would ‘free people up’ to continue working on apps which don’t have viable business models after all. One thing’s for sure: if electricity did indeed start to become free, the consequences would be much bigger than whether apps are free or not.

A disturbing but important lecture about reinventing the lecture