> Global View > The Americas > Underwhelmed by interfaces? Want to see what’s coming next? 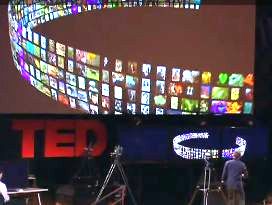 If a ‘scaled-up iPhone’ doesn’t impress you in terms of giving you a glimpse of the future, then watching this video might just offer a more revealing insight into where the interaction between human and machine is heading.

Note from an embarrassed author

I initially put this article together on the 8th of June, but I spiked it because I felt that the Microsoft Kinect launch had made my enthusiasm for this look unrealistic and outdated. How stupid did that make me feel when I saw a story about this video appear at the top of TechMeme today?

What will you learn?

Don’t worry if the first few demos seem a bit obscure, once he has taken you through these, John Underkoffler tells you something quite unexpected about them all (I’m not going to tell you what it is, it will probably spoil the experience if I do) which will leave you eagerly anticipating the next set of demonstrations.

All I can say is that I wasn’t disappointed, although they are actually a bit messily improvised (unlike the first demos, he conducts many in the second set live on stage) and in some cases they probably need watching a second time to fully appreciate them.

You’ll perhaps be a bit surprised to discover that despite some very important recent and not so recent advances, we hardly seem to have scratched the surface in terms of the potential sophistication of what user interfaces can do for us.

Notwithstanding the impressive nature of some of these demos, you get the distinct impression that we were only witnessing a handful of niche applications, and that the Minority Report interface, whilst some may see it as having ‘already arrived’ with the advent of the iPhone and iPad, is still more of a pointer towards a reality which is yet to come, a world where such interfaces, instead of being, as they are today, the exclusive preserve of certain upmarket gadgets and gizmos, become a pervasive feature of big things like living room interiors and supermarket aisles.

Contagious at FITC with John Underkoffler

And if you want to see what it’s like if you aren’t constrained to building interfaces and just need to simulate them, then this next video is where the ‘state of the art’ has moved to since Minority Report:

And so then you just reduce the scale by fifteen orders of magnitude…what?