> Technology > Web & Consumer Tech > Tearing sharing to pieces: why openness is about more than sharing 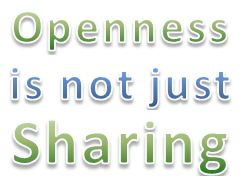 Sharing is useful, right? Motherhood and apple pie, surely? The stampede of sacred cows being ruthlessly sacrificed in this extraordinary video bonfire of academic vanities lends it an intoxicating but perhaps far too beefy aroma for some

Unless you add hearty dollops of engagement and contextualisation, ‘just sharing (in this case such things as) educational materials’ is a self-deluding token gesture, a recipe for low takeup and questionable outcomes’.

A topical (but not typical) controversial case relevant to the sharing/open content availability/educational materials dissemination debate is Kahn Academy, which is open, shared, seems to be enjoying great take-up and doesn’t get bad grades for outcomes.

The relevant controversy is over the contrast between Kahn’s very up to date deployment (YouTube videos) and its teaching approach, which is ‘traditional’ (‘talk and chalk’ style, rather than interactive lessons).

This latter aspect is what can (in this context) be claimed to ‘require more than just sharing’.

It produces far less consistent results when it is used in isolation from or as an alternative to more interactive and ‘human mediated’ tuition unless the conditions are ‘optimal’ (i.e., a student with [at least somewhat] above average levels of motivation and learning capability).

The ‘beyond sharing’ questions which Khan Academy’s approach raises are not inherently unsympathetic to what Khan has created, which is undoubtedly an impressive body of work and a significant contribution to education.

What does need to be said, is that bereft of engagement, interaction and contextualisation, mere sharing ‘underperforms’ as a ‘dissemination process’ of learning.

Mere sharing, in this sense, can be seen as an ‘abdication of responsibility’ and a ‘failure to give others the opportunity to get the most out of your own content creation endeavours’, which can certainly be a waste and a shame.

That said, what may ultimately be the saving grace of Khan Academy, is that Khan himself sees his shared videos in the context of a ‘flip the classroom’ model.

This is where the videos can be used in a context where the human teaching resource is ‘liberated’ by the availability of his videos, so that the classroom teacher (or one to one tutor) can use all the time that they are in direct contact with the student interactively (e.g., shaping questions and responses based upon an exclusive appreciation of the student’s state of knowledge and particular learning predispositions) and then have the student watch the videos in ‘homework time’.

The availability of the tutorial videos is intended more as a substitute for (or to complement) textbooks, rather than as a replacement for a classroom teacher or personal mentor.

What is left as a requirement in the light of this development (i.e., the advent of the availability of significant bodies of ‘shared and shareable educational material’) is a debate about how to ‘set up an infrastructure’ such that the consequence is not the following:

So the debate should focus upon: How do we create an infrastructure (which can be deployed quickly, easily and cheaply) which helps us, if we do intend to ‘share by making teaching videos’ to:

You’d have serious difficulty in finding a more conscientiously iconoclastic figure in education that the irrepressible Sally Fincher.

She’s a legendarily feisty computer science education researcher from the University of Kent School of computing.

The video at the top of this article was of a talk called Useful Sharing given by Sally Fincher at the University of British Columbia UBC Department of Computer Science‘s Distinguished Lecture Series, February 24, 2011.

It was given on the 7th of April 2011 at the Computer Science Education Research Conference (CSERC’11) which was collocated with the NIOC 2011 conference held at the Open Universiteit in Heerlen, the Netherlands.

What if startup ideas didn’t matter to investors?

What can you see at a trillion frames per second?

1224
'How to', Entrepreneur's Briefcase, Innovation & Strategic, Life itself, Startups