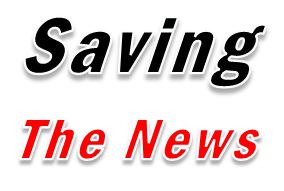 Rescuing serious journalism by productively reducing it to mindless fun

Few news editors would claim that they are not an endangered species, so even the most whimsical-sounding ideas are no longer quite so easily dismissed as being irrelevant or unnecessary

In news reporting, instead of being associated as they are elsewhere with commendable innovation, adjectives like ‘competitiveness’ and ‘creativity’ are often associated with the less savoury aspects of the editorial and journalistic arts.

With this in mind, it may come as something of a shock when highly regarded initiatives aimed at reversing the decline of the news industry endorse an approach which unashamedly aims at ratcheting up these factors by turning the serious job of news reporting into a surrealistically-effortless exercise in instant video-game creation.

What is most surprising about the talk in the video below is that the speaker, who demonstrates what must be the fastest game-creation process ever seen, and is a leading protagonist in the grant-funded endeavour to ‘gamify the news process’, is none other than that most outspoken critic of Gamification, Ian Bogost.

A critical aspect which Bogost is trying to address here is the seemingly insurmountable challenge of speed and cost of production of highly relevant and compelling online games which tackle current affairs.

If the production of news-story-specific games are to have any potential whatsoever to attract public interest and significantly increase engagement in important news stories, the games have to be produced quickly enough for the story in question to still be topical and also cheaply enough to allow cash-strapped media outlets to produce relevant, credible and playable games as part of their daily newsflow, without hiring any games programmers and without slowing down or reducing the output levels of journalists.

Bogost demonstrates an astonishingly intuitive visual interface which enables a journalist with zero programming skill to turn any news story into a plethora of different custom-designed games in seconds.

Here’s an earlier video, explaining the project that Bogost was working on under its initial name, The Cartoonist:

Here is Bogost talking about some of his earlier work in 2009:

In the mind of the general public, video games have not yet become associated with anything other than entertainment, and even as entertainment they are typically seen as being a stigmatised, undesirable feature of modern life, in many ways ‘even worse than the worst TV’ reflecting anti-social behaviour, laziness and a self-indulgent waste of time.

Bogost sees potential for a genuinely valuable contribution to society in games, a potential which has yet to be fully realised, but as new social challenges emerge and traditional institutions falter in their struggle to keep pace with technological progress, the seeming inevitability of just about everyone eventually wanting to at least tentatively explore the practicality of game-inspired solutions is only likely to intensify the paradox of this arch gamification-sceptic’s contribution to a much more gamification-receptive world.

Here is a bit of background on Bogost, taken from an article about him in Wikipedia:

Ian Bogost is a video game designer, critic and researcher. He holds a joint professorship in the School of Literature, Media, and Communication and in Interactive Computing in the College of Computing at the Georgia Institute of Technology, where he is the Ivan Allen College of Liberal Arts Distinguished Chair in Media Studies.

He is a founding partner at Persuasive Games.

His research and writing consider video games as an expressive medium, and his creative practice focuses on games about social and political issues, including airport security, consumer debt, disaffected workers, the petroleum industry, suburban errands, pandemic flu and tort reform.

He is the author of Unit Operations: An Approach to Videogame Criticism and Persuasive Games: The Expressive Power of Videogames as well as the co-author of Racing the Beam: The Atari Video Computer System and Newsgames: Journalism at Play. Bogost also recently released Cow Clicker, a satire and critique of the influx of social network games.

Why not update yourself on seven major robotics projects at once?

Exit strategy more important for startups than a business plan?