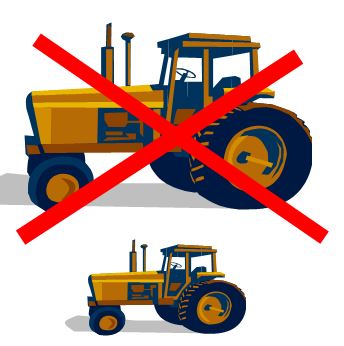 Squeezing bigger crop yields out of the soil by just upgrading to larger, heavier, more powerful machines doesn’t look sustainable. Up to 90% of the energy used in crop cultivation is wasted on dealing with the damage caused by the cultivation equipment itself

Agricultural tech needs to get lean

We use huge, powerful machines because we want to be able to drag ever more massive farming equipment through wet soil to get cultivation done in shorter and shorter ‘working windows’ of time.

But as the monstrous bulk of today’s industrial cultivation juggernaut bears down mercilessly on the land, it relentlessly compresses and compacts the soil much more than the smaller, less powerful preceding generations of tractor and trailer.

As operational working windows for cultivation shorten even further, so we build even bigger, heavier and more powerful machines, which compact the soil even more, ultimately driving farmers to need even bigger tractors and heavier implements to deal with it, and so on, in a seemingly unbreakable vicious circle.

In tomorrow’s, energy-optimised, wastage-intolerant farm, every single individual plant in the field will need and expect individual attention in order to maximise yield: today’s bulky human-operated machines, many of which are simply too big for that job, will ultimately be replaced by much smaller autonomous robot farmers.

We’re nowhere near ready for fully mechatronic crop farming, but we’re working on it

Until we get those small farming robots, there’s a simple, revolutionary but nonetheless challenging way to fix the compaction problem, it’s called Controlled Traffic Farming

Introducing Controlled Traffic Farming might not necessarily result in smaller farm machinery, but it will put an end to the otherwise wasteful need for machines to keep getting bigger just because they need more power to get through fields that it is chewing up and squashing down.

The improvements in terms of reduced fuel costs alone can be dramatic.

Precision what? Wasn’t farming already all about precision?

You’ll hear the terms Precision Agriculture and Precision Farming when these issues are discussed.

There’s a Wikipedia article on Precision Agriculture from which I have taken the liberty of extracting relevant material and ‘tidying up’ below.

The relevant ‘revolutionary’ aspect that constitutes the ‘precision’ being introduced into crop cultivation covers a wide range of different issues, but if you were looking for the single new phenomenon which spurred its introduction it would undoubtedly be advent of affordable geolocation technology and the opportunities that it opened up for tackling inefficiencies caused by the inherent variability of the physical environment where crops are grown.

My extract/edit from the Wikipedia article on Precision Agriculture:

Geolocating a field enables the farmer to overlay information gathered from analysis of soils and residual nitrogen, and information on previous crops and soil resistivity.

Geolocation is done in two ways:

The base images must have the right level of resolution and geometric quality to ensure that geolocation is sufficiently accurate.

Point indicators allow them to track a crop’s status, i.e., to see whether diseases are developing, if the crop is suffering from water stress, nitrogen stress, or lodging, whether it has been damaged by ice and so on.

This information may come from weather stations and other sensors (soil electrical resistivity, detection with the naked eye, satellite imagery, etc.).

Decisions may be based on decision-support models (crop simulation models and recommendation models), but in the final analysis it is up to the farmer to decide in terms of business value and impacts on the environment.

Precision agriculture around the world

The concept of precision agriculture first emerged in the United States in the early 1980s. In 1985, researchers at the University of Minnesota varied lime inputs in crop fields.

It was also at this time that the practice of grid sampling appeared (applying a fixed grid of one sample per hectare).

Towards the end of the 1980s, this technique was used to derive the first input recommendation maps for fertilizers and pH corrections.

The use of yield sensors developed from new technologies, combined with the advent of GPS receivers, has been gaining ground ever since.

Today, such systems cover several million hectares. In the American Midwest (US) it is associated not with sustainable agriculture but with mainstream farmers who are trying to maximize profits by spending money only in areas that require fertilizer.

This practice allows the farmer to vary the rate of fertilizer across the field according to the need identified by GPS guided Grid or Zone Sampling.

Around the world, precision agriculture developed at a varying pace.

Precursor nations were the United States, Canada and Australia.

In Latin America the leading country is Argentina, where it was introduced in the middle 1990s with the support of the National Agricultural Technology Institute.

The United Kingdom was the first to go down this path, followed closely by France, where it first appeared in 1997-1998.

Today, less than 10% of France’s farmers are equipped with variable-rate systems.

Uptake of GPS in France is now more widespread., but this hasn’t stopped them using precision agriculture services, which supplies field-level recommendation maps.

Precision agriculture management practices can significantly reduce the amount of nutrient and other crop inputs used while boosting yields.

Farmers thus obtain a return on their investment by saving on phytosanitary and fertilizer costs.

Applying the right amount of inputs in the right place and at the right time benefits crops, soils and groundwater, and thus the entire crop cycle.

Consequently, precision agriculture has become a cornerstone of sustainable agriculture, since it respects crops, soils and farmers.

Sustainable agriculture seeks to assure a continued supply of food within the ecological, economic and social limits required to sustain production in the long term.

Precision agriculture therefore seeks to use high-tech systems in pursuit of this goal.

A tale of two planes