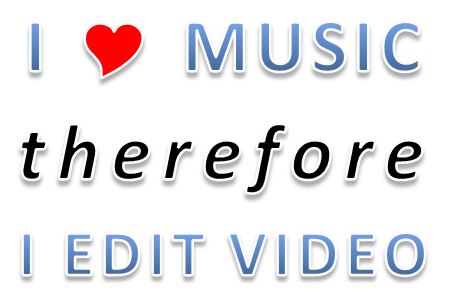 Just ‘gigging, recording and getting discovered by a record company’ is yesterday’s intro to a musical career. Nowadays, you need to be able to build your own online TV channel that does justice to your best songwriting and performances.

What? I’ve already got tons of video online

Rob ‘Chappers’ Chapman (aka ‘The Monkey Lord’) of Chapman Guitars

“Gone are the days when you gig and gig and gig in little venues on the circuit and get spotted and signed to a label and then you’re off with a big career.

You may get signed, and it’s great if you do, if you want to be signed, but the days of a long career through being signed are pretty much… gone

and what you’re much safer doing is building up your own system, your own network, whereby you work for yourself, you sign yourself and it’s a lot safer, a lot more secure, it’s a lot harder, but you have all the control… something you need if you want to do this for the rest of your life”

Just think about that seriously out of place-sounding word that Chapman just used for a moment: control.

“Control? I don’t like the sound of that! Why control? Why me?”

Whatever happened to the relaxed, creative spontaneity of the idyllic ‘laid back lifestyle’ of that iconic freewheeling itinerant troubadour, the carefree musician?

Control only sounds ‘artistic’ when you put the word ‘artistic’ next to the word ‘director’: think control-freak movie-maker, not footloose musical artiste.

The answer to ‘why control? starts with another question:

You’re looking for a ‘laid back lifestyle’ today?

Forget having a career (some may not want one).

If you love making music enough to want to make a career of it, you’ve got to realise that today, a lot of what you’re going to be doing is nothing like the old school ‘getting discovered’ way of doing things.

Today’s musically mediated life: mastering tools which connect your passion for creating music with anyone else who loves what you’re doing, by getting as close to real-time as you can stomach

Today, there is a lot more ‘do it yourself’ to being a successful musician than just making music.

The Internet, social media and music technology have turned the notoriously unrealistic hope of ‘getting it all done for you by someone else’ into a much better alternative: you can do it yourself, and if you put in the effort, you can make it work, and the effort is not ridiculous or unreasonable.

In fact, DIYing all the things that help you build an audience can be just as creatively exciting as any other musical activity (although, just like most good musical performances, they need plenty of practice).

Technological advances have made the non-musical side of being a musician cheaper and easier to learn and to do, but that doesn’t mean that they have made it a push-button thing: you will still need to learn new skills (some of which are only indirectly connected to making music) and you will still find yourself spending many hours working on them.

Otherwise you can be just as laid back as you like right now, if all you want is to spend the rest of your career as a penniless busker (I know, this does appeal to some of us) or worse.

If, instead of seeming like an escape from the rat-race, a ticket to freedom and the carefree open road, a future spent desperately hoping to snare passing shoppers for small change sounds to you more like a life of deprivation, squalor and a grinding daily struggle for existence, then you need to thank your lucky stars that today, YouTube, plus some serious determination, can  finally turn even the merest smidgen of musical talent into a surprisingly sustainable career option.

For musicians, technology is making ‘controlling your own stuff’ more and more ‘financially sustainable’ i.e., easier and cheaper all the time, but there’s definitely some serious upfront effort you’re going to need to put in to be able to do it well.

Ok, so I’m interested: of course I want to do music for the rest of my life, just somehow convince me that this creepy-sounding new ‘control thing that musicians are supposedly doing’  is not as depressingly ‘materialistic’ and ‘spiritually degrading’ as I imagine.

Well, before you buy in to it, you need to know something else that’s wrong with ‘the old way’: it’s still out there, it’s just in decline.

The old control model was someone telling you: ‘We genuinely believe in your talent. just sign here and we’ll take care of everything’.

If you were lucky you would be signing your career over to a household name record company.

TV talent shows turn out to be one of the last remnants of this old system that are still in the public eye.

For just about everyone else, either nobody ever asked you to sign, or instead, for the vast majority of those that did get signed up, they recorded, toured and still lived hand to mouth, because having someone ‘take care of everything’ meant that you were actually in control of nothing, especially when it came down to whether, no matter how well your tickets and album sales were doing, there was ‘miraculously’ still rarely more than a pittance left over to pay the rent with (despite the fact that the record company didn’t seem to be doing too badly).

Nowadays, you don’t need that kind of luck.

You do still need at least a bit of talent, and you definitely need plenty of determination.

Yes, it’s still hard, but it’s getting less necessary to hand control over to anyone, less necessary to give it up, less necessary to create dependency on people who in theory can free you up to be creative, but in practice leave you open to future ‘business relationship issues’ that look less like a career and more like ‘the road that should never have been taken’.

Yes, being able to delegate things that you aren’t interested in doing (or hate, or don’t want to know about, or are no good at) is really important, but without understanding how to control your own ‘working environment’ and ‘relationship with your fans’ this ‘delegation’ is just going to force you to pay a painful price ‘further downstream’.

Stop ‘just hoping to get discovered’.

Go and find the tools and skills that enable you to do this.

As a serious musician, you already know that putting lot of hours in pays off.

Put some hours in to becoming a consistent and persistently competent creator of your own music videos and a competent online promoter who can keep growing numbers of fans happy and it will pay off too.

On the Internet of Bits and Pieces, "just works" won't be good enough

'How to', Entrepreneur's Briefcase, Innovation & Strategic, Life itself, Perspective, Startups...

Why do startup accelerators get into trouble?