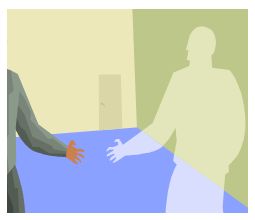 We’re leaving trails behind us, both offline and online, inside and outside of social media, that we don’t notice, but marketers do, and they’re using them to spot our closest friends, betting that they’ll share our tastes and would probably buy what we bought if they were approached.

A pioneer in this new science is Media6Degrees, who’s CEO Tom Phillips makes it all crystal clear in this video.

The science (if that’s what it is, it’s another of those terms which didn’t have its own Wikipedia page at the time of writing) which its protagonists call sociographics, could be categorised under the heading of ‘segmentation schemes’, which include demographics and psychographics (hitherto trusted ‘sciences’ which are now apparently being dismissed as obsolete by devotees of sociographics) which identify some distinguishing characteristic of the prospect (which ‘classifies them within a specific market segment’) which can be targeted.

If you have one friend, your sociographic (or ‘social graph’ a term which was initially only applied to social media) is a segment populated by two, you and your friend.

Think you can get away from sociographic targeting by not using ‘public’ social media or online forums? What about that gift that you ordered to be delivered?

Wherever transactions are recorded and where ‘shared affinity’ can be inferred (and you haven’t somehow managed to opt out) marketers can and will try to work out who your friends are and sell to them.

Inferring shared affinity isn’t as much of an ‘artificial intelligence’ job as it seems. It turns out that it’s the ‘long tail’ phenomenon taken to its logical extreme. Call it ‘hunting anti-viral content’. Imagine only a very small number of (otherwise seemingly unconnected) people (say, two) check out a single item of publicly shared ‘user generated content’. What’re the odds they’re not connected? Real world testing is convincing practitioners of sociographically driven marketing that you won’t be wasting money if you decide to place bets on ‘shared affinity inference’.

A good guess is that this phenomenon will probably only reach its true potential once a wider range of different possible sources of sociographic data are brought together.

Where does user generated content end and video journalism begin?

At last! A new video introduction to nanotech