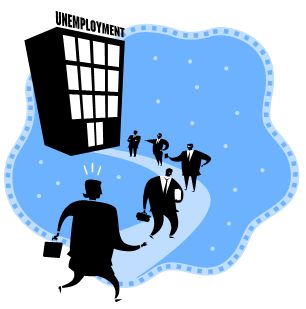 What are the differences in social media activity when comparing employed and unemployed people? Would you take on a job that was underpaid and unattractive, start or join a fun but non-paying, penniless startup, anything so as not to have fewer social experiences to share online?

If we are about to see a massive upsurge in layoffs as a result of deficit reduction efforts, the future of work may include:

The following questions arise in the context of unemployment benefit legislation related to ‘mandatory job seeking requirements’ for benefit claimants.

Should the unemployed be discouraged from posting on social media, because it consumes time which should be expected to be spent ‘job seeking’?

My view: no, because claimants could be exclusively using social media ‘after hours’. Nonetheless, benefit regulators may decide to monitor ‘posting times’ for those spending ‘job seeking working hours’ (e.g., ‘weekdays, nine to five’) posting (or revealing in the material that they post that they were not engaged in job seeking activities when they were expected to have been) on social media.

In the context of facilitating monitoring, regulators may consider actually encouraging claimants to use social media. In fact they may consider also asking them to use it as a way of demonstrating their compliance with job seeking requirements by posting their job seeking experiences (but considering the privacy concerns of prospective employers, I suspect this material is far more suited to being posted on a private online service than on public social media).

Should the unemployed be discouraged from embarking upon startups whilst being paid unemployment benefits?

My view: no, as with time spent posting on social media, working on startups could be exclusively restricted to ‘after hours’. However, once again, social media postings of startup activity could be monitored by those keen to ensure that job seeking time was not ‘otherwise occupied’ with non-job seeking activity.

From an unemployment claim reduction perspective, startups are at least in theory the source of future employment, so the possibility exists (and here we might find ourselves hitchhiking our way into the Douglas Adams world of Infinite Improbability) that the authorities might insist that the startups operated by the unemployed are officially required to demonstrate compliance with something like Eric Ries standards of ‘Lean Startup rigour’ so that they stand the most chance of generating enough income to produce sustainable employment, thereby simultaneously potentially reducing the level of both unemployment claims and ‘exclusively social media experience sharing motivated’ no-hoper startups.

If this ‘mandatory lean startup fantasy (nightmare?)’ really happened, and the result was significantly reduced unemployment, the next thing would be for the authorities to insist that everyone who became unemployed had to work in a (lean) startup. After hours. Whilst still having to do job seeking during working hours.

If that in turn produced even less unemployment (because it produced even more startups that between them earned enough income to pay sufficient numbers of former unemployment benefit claimants) it would not be unreasonable to expect those in charge to change the balance of job seeking hours to allow more startup hours and fewer job seeking hours. And if that ‘incursion of permitted (or even mandatory) startup hours into the unemployed job seeker’s week’ produced even less unemployment? You can work out the next logical step for yourself. Sleep, anytime, anyone?

Innovations in socio-gonzo kiss and tell

Think Kubrick was obsessed with detail? Games design is going much further than film