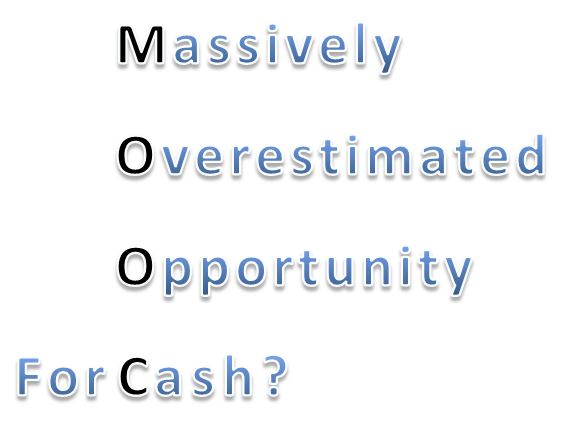 The educational world, terrified by Massive Open Online Courses, is putting on a brave, smiling face and joining in, because it sees them as unstoppable and hopes it can somehow survive and even benefit from them

Here is a respected pundit, whose answer to this kind of question:

‘What should an educator do, in the light of Coursera (who offer free educational materials online, a MOOC) if they are designing a course?’

Would be this: (my paraphrasing, his original words are quoted in the sidebar)

‘Trash your own course materials and teach your students using Coursera’s materials instead’ (because their materials will be created using far more sophisticated and up to date resources than almost any individual tutor could ever afford to use).

“If I was teaching a course right now, on, let’s say, ‘Social Network Analysis’ within a university, here’s what I would do: I would trash all of my course materials, I would use none of them and I would tell my students “sign up with Coursera, take their course, we’ll spend our time interacting around those content elements, I will mark and evaluate what you’re doing, but trust me, their content is better than what I can produce within my university budget”

Connectivism: A Learning Theory for the Digital Age

He goes on to respond to someone who asks him how on earth they could possibly implement his suggestion: replacement of their course materials is simply not something that they would be allowed to do quickly, if at all, because their teaching institution does not allow them to change the course material without going through a lengthy official approval process.

We’ll come back to the Faustian MOOC implications of these approval issues later.

Coursera is teaching hundreds of thousands (and very soon millions) of online students.

Many of whom, up until now, were not students, because they couldn’t afford to be.

The biggest question this raises (a question whose currently unsatisfactory answer reassures existing educational institutions that they are not threatened with extinction) is this:

How will free courses turn into the kinds of qualifications that employers can trust, without offering (essential and expensive to provide) sufficiently rigorous examination invigilation and grading resources?

The future of the whole world may turn upon the answer to this question.

If it turns out that this problem proves to be much more easily, effectively and cheaply soluble than anyone (especially the participating universities) can imagine, then the following will inevitably follow:

Places in the world where those eager to educate themselves find that online education enables them to become eligible for highly qualified work, will quickly become home to a resource that is far too attractive for the demands of first world economies to ignore.

And so it may come to pass that the first world finally loses the one thing that really sets it apart.

The most valued education in the world is in the places which cost the most to live and learn (as a result of a kind of self-perpetuating feedback loop).

This loop may be about to be broken.

Highly qualified professionals such as scientists and engineers are still to this day mostly either home-grown, or are at least almost exclusively the products of a long-established (usually first world) traditional educational infrastructure.

Remember how quickly the western world’s industry flipped over to overseas manufacture, and how comprehensive that move was, despite the fact that it immediately and seemingly irrevocably undermined centuries-old industrial traditions of home-grown manufacturing?

The sheer speed of takeup and expansion of Coursera is much faster than that.

The invigilation/proctoring question may currently look like a potential showstopper as far as threatening the existing status quo, but if you want an example of how that could be overcome, just take a look at Wikipedia.

Whatever criticism you may have regarding the extent to which any particular Wikipedia article may be instantly created or interfered with and filled with unreliable, unsavoury, or even meaningless nonsense at any time, nobody could ever reasonably claim that the ever-vigilant and highly responsive community of dedicated Wikipedian volunteers, once such a transgression had been brought to their attention, were anything other than lightning-swift and efficient in their unrelenting efforts to defend of the integrity of the online encyclopaedia.

Here is a highly relevant example of committed and effective volunteers who are prepared to put in very serious amounts of time, unpaid, to do a job whose duties and motivations do not seem to me to be a million miles away from the requirement for systematically and effectively determining the validity of (and thus upholding the integrity of) an online course student’s professional examination submissions, grading and graduation.

The release of expensively produced course content freely into the wild may be a genie (which grants the wish of excellent education for the whole world) which cannot be put back in the bottle.

The established educational institutions, in their efforts to re-establish control over the financial value of their educational offerings, will need to continually update and improve their content, offering the very latest material to their paying students.

Will this differentiation of greater speed of update and improvement (of ‘massively closed, offline content’?) be sufficient to ensure that their paid qualifications are worth paying potentially orders of magnitude more than MOOCs (proctoring issues notwithstanding) for?

Ok, so there is a potential ‘offline’ requirement if the exam invigilation needs to be verifiable (I don’t know if formal examination invigilation has ever been deemed to have been satisfactorily implemented ‘remotely’ using such things as Skype) but even so, somehow I think that the sheer intensity of demand for this ‘proctoring requirement’ to be addressed, in the light of the astonishing Coursera take-up rate, combined with the inventiveness of those such as Wikipedians (although I doubt that most MOOC invigilation will end up being predominantly unpaid) indicate that ‘ways and means’ can and will be quickly found to address this requirement, to a level which unreservedly satisfies employers.

Although existing educational institutions may imagine that they can use the free provision of their own course materials online as a means of perpetuating the highly lucrative value that they currently offer (by virtue of the fact that the outstanding quality their materials may constitute an irresistible advertisement for their courses) the levels of demand uncovered by Coursera essentially render the universities’ own embrace of the MOOC approach ‘an insurance policy for an unquantifiable peril with an open-ended premium’.

That ‘approval process thing’ which I mentioned earlier may ultimately put the ‘pure play’ MOOC providers at an advantage compared with their more bureaucratically impeded bricks and mortar educational counterparts.

Even if the established institutions in question embrace the release of their materials for free online, their ‘approval workflow’ may simply be too slow to catch up with less impeded online-only players: this ‘fast response imperative’ imposed/addressed by MOOCs and their content delivery capabilities, may in fact turn out to be a genuinely disruptive ‘real-time innovation/responsiveness’ issue that proves to be a large established educational institution’s Achilles heel.

Alternatively, it is equally possible that a large organisation may successfully prioritise the content update pipeline and use their superior resources to outperform their pure play competitors.

Will today’s pact with Coursera come back to haunt you?

The Faustian aspect here is that Coursera itself is not pure play: its content is also coming from Universities, who will consequently be competing with themselves and their own content.

In such cases, private, as yet ‘unreleased for free to the general public’ content, will be used as a justification for charging student fees.

Will this ‘closed’, ‘early’, ‘unreleased’ material endow the students who use it with more valuable levels of employable capability than its free, generally available predecessor?

This is like software: the author charging for the latest version has to make it clear that the older, ‘unrestricted availability’ free/trial version has been rendered less attractive by the exciting new features of the latest chargeable release.

Come to think of it, MOOCs make education more like software than anything ever has.

The other software-like aspect of the MOOC vs. conventional education debate is support: paid software support in this context is a bit like the role of the tutor.

Paying for a package that also includes support is like paying for a non-MOOC traditional course.

The justification for paying for software support (when a free unsupported alternative is also available) is often based upon the requirement that the software you are intending to purchase is not for casual use: others will be depending upon what you use it for, so your proficiency becomes essential and worth paying for.

In education, the support equates to the tutor and ‘the others who will be depending upon what you use the software for’ equate to the employers and their customers.

George Siemens’ ‘MOOC plus tuition’ formula may turn out to be something employers are prepared to pay for (but notice in his case, the MOOC course materials that he will be using will be free and his university will be charging for the course: one could envisage scenarios where some MOOCs might offer chargeable ‘premium materials’ (such as course content customisation tools) to educational bodies who wanted to use (otherwise non-chargeable) MOOC materials to provide chargeable courses.

These kinds of ‘premium offerings’ may be the way that MOOCs can establish large enough revenue streams for themselves (in addition to such services as proctoring) such that they can at least not fall too far behind if the traditional institutions decide to respond to MOOCs by speeding up their (privately available and chargeable) course content production cycles in order to make free MOOC course content less attractive.

Perhaps job applicants who have been using tuition-free/cost-free MOOCs could submit interim performance assessments to prospective employers with the employers given the option to pay for the applicant to ‘upgrade’ to a ‘paid tuition plus MOOC content’ (i.e., potentially cheaper than completely MOOC-free traditional courses?) arrangement, either to improve/reach their level of proficiency with the job they are applying for, or to speed up their availability to start employment.

The issues which complicate this question specifically include study groups and the progress of AI:

To what extent do peer-support and study groups undermine the necessity for tutors and paid tuition and to what extent will AI make enough of a difference to the seriously impact tuition requirement on many courses?

Daphne Koller of Coursera provides some startling anecdotes regarding recent advances on these fronts which makes the following video worth watching all the way through:

All of education will be affected by this, not just universities

Outside of the world of ‘successful education’ (that offers well paid employment to all who pass through it) are billions of people whose physical circumstances, in terms of living conditions and local employment, preclude them ever having anything to offer other than cheap, unskilled labour.

We know that Moore’s Law will (and has already begun to) make the Internet one of the only things from the first world that will be just about cheap enough (a few weeks wages) for them (and for many of the poorer occupants of the first world) to use.

If it turns out that the one thing that the Internet can uniquely guarantee to give to poor people to change their lives in the immediate term is not cheaper food, better healthcare, housing or transportation, but is an unexpectedly excellent education, with consequently transformed global employability, then the kinds of sudden change that the Internet seemed to promise before the March 2000 Internet bubble-burst, but have since been mostly consigned to the realms of unrealistic hubris, will happen after all.

Innovation competitions: why we need more of them

Why not update yourself on seven major robotics projects at once?