> Technology > Web & Consumer Tech > The switch from doing jobs to starting startups: will we even notice? 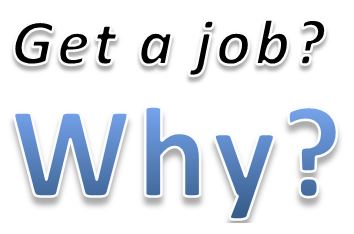 Could our increasingly online lifestyles morph smoothly into self-employment if today’s culture of ’employee-based careers for all’ gradually fades into oblivion?

Something important has happened without us really noticing.

Could the Lean Startup model play a role in a switch to a startup-dominated occupational culture?

The ’employee turned startup founder’ will quite possibly start their venture without having any investment money to ‘waste’ in a non-Lean way.

However, Lean Startup’s principle of rapidly determining the size of potential markets for novel solutions can certainly these days at least be started without having to spend any money on development.

A penniless individual operating on a Lean Startup model  is essentially someone conducting a market research exercise for products and services that don’t yet exist.

Market research exercises of this sort involve starting conversations with prospective users about requirements to solve a problem, in the context of a speculative solution to that problem that the startup founder has dreamed up.

Starting conversations that might turn into opportunities to provide new things that people want and are prepared to pay for (and learning how to do this well) may just turn out to be the activity which replaces today’s job seeking, either because mastery of it becomes culturally encouraged or because job seeking itself switches to becoming much more of a minority sport than it is today.

People of all ages and backgrounds are starting to make a point of not making much of a fuss about instantly embracing technological change, even though (and more than likely because) they are encountering fresh changes on an almost daily basis.

It is becoming increasingly tiresome to seem too awed when discovering that you are able to do yet another thing online that you previously could only do offline.

‘Wow fatigue’: we very quickly stop raving about it, we just use it and pass it on

Yes, we might initially be expected to find ourselves still saying ‘wow!’ or ‘amazing!’ when someone shows us one more thing that we currently do offline that’s suddenly been made easier, usually because of a new mobile app, but that’s about it: from that point onward, we’ll be expected to do three things: use it if we need to and, at a relevant moment, ask others whether they know about it, and if they don’t, then show them how to get it and use it.

If we do make too much fuss about these kinds of things on a regular basis, it is usually a sign to others that have stopped making such a fuss (which is rapidly becoming the majority) that we are not really adjusting to the culture.

Such ‘technologically maladjusted behaviour’ is becoming beyond uncool, it is antisocial: you are going to be seriously annoying people by regularly obliging them to justify spontaneous and uninhibited technology adoption behaviour that seems to them to be straightforward common sense and which is also ‘no big deal’.

And yet, despite all this ‘labour-saving’, we still expect to need to work

However much we might still fantasize about a future where all the work is done by robots and a life where the need to have a job has been eliminated, our current experience of ‘things going digital in our lives’ doesn’t seem to have left most of us feeling that it’s all getting to the point where we probably won’t need to work for a living any time soon.

Even though a lot of things are free online (usually paid for by advertising) things like food and clothing, transport and accommodation still tend to need money and to most people that means needing a job.

Something else hasn’t changed: jobs are still looking easier than starting startups

Things going online also don’t change the fact that, in a job, as an employee, you are usually just involved in doing something which is just a relatively small part of a bigger operation, rather than being responsible for running the whole thing.

You apply for jobs (maybe online) and if things work out, you get one.

Things going online therefore don’t seem to have changed the fact that ‘being an employee’ still looks to most of us as if it is a much simpler thing to make happen, as well as imposing a less demanding lifestyle and offering a much less risky way of earning a living than starting a business.

But could ’employment as the default career of the masses’ come to an end long before all the work will be being done by robots?

As someone who is really interested in the future of startups, this recent change in attitudes to embracing technological change raises an important question in my mind about the future of work:

Is the re-shaping of our lives, changing from a (comparatively recent) state of affairs where there was just an ‘online option’ to one where for many things there is now only an ‘online imperative’ (where doing things offline is not just harder, but actually impossible: official ‘paperwork elimination’ for example) also going to result in a similar kind of change from a ‘startup option’ to a ‘startup imperative’ (jobs becoming much scarcer, even for those professionally qualified, by contrast with startups which might just be becoming much easier to start and sustain)?

What would need to change before the option of founding a startup overtook that of becoming an employee?

At first sight, it seems like quite a stretch: although something as small-time as selling unwanted household items on eBay might in some sense be deemed to constitute ‘doing business’, to imagine that anybody would treat the fact that they had ever done this as a basis for seriously committing to ditching their day job and replacing it with being a full-time online vendor, would probably be to go just a bit too far for most of us (although a significant minority have indeed made this switch).

The main problem with being too cavalier about projecting the ‘job to startup switch’ based upon such a simplistic model, is that it doesn’t take into account of the fact that this is one option which has already existed for quite some time and although it has indeed spawned a significant number of new businesses, it has not resulted on a decisive shift in the balance between the self-employed versus employees.

So the next logical question would seem to be:

Is anything ‘waiting in the wings?’

Has anything else changed since the advent of such simplicity of doing something like setting up an online shop, but which has yet to make its impact in terms of shifting that balance?

Would the thing that would make startups start to replace jobs on a much bigger scale be:

At the moment, because there is no sign of a widely recognised shift in the balance, I would say that if any of the factors above are currently increasing in prevalence or impact, they have not yet reached critical mass.

But if you coupled a steady increase in the widespread prevalence of these ‘startup facilitation factors’ (an increase which I do believe is actually under way) with a significant and sustained drop in the job market (resulting from a discernible long-term trend, such as the automation-driven effects discussed by Erik Brynjolfsson and Andrew McAfee in their book Race against the machine) then perhaps you could expect a sudden and unprecedentedly large surge in the number of people who would be starting startups.

However, because most ‘casually initiated startups’ are not ‘registered’ in any formal sense, a sudden upsurge of such activity would probably become apparent in an indirect way.

The way that this might be expected to manifest itself ‘at the macroeconomic level’ would be a very significant drop in the numbers of people in paid employment (bought about by layoffs triggered by any one or combination of: market shrinkage, cuts in public services, or massive productivity improvements brought on by automation) which was not accompanied very soon after by the anticipated associated drop in consumer spending.

If there had been a preceding serious drop in employment, an uptick in startups would perhaps be expected to come from some of the laid off employees spending their redundancy/severance money on starting new businesses.

In such circumstances, the usual questions regarding ‘flash in the pan’, unsustainable, hastily and poorly thought through no-hope ventures inevitably come to mind. In other words, most expectations at that point would be that any perceived switch from from employment to startups was really just the first step on an ex-employee’s journey to unemployment.

But what if something new is beginning to happen to the ‘job versus startup equation’, and it turned out that the ‘digital imperative lifestyle’ was playing no small part in it?

Even a worst-case scenario may not stop startup takeup

What if, even with no redundancy money (either all spent or never given) and with just dole money (and being confined to living what startups call a ‘ramen lifestyle’) or maybe even with ‘normal working hours’ having to be spent stacking shelves just in order to be able to afford ramen, the online world will start to make starting a startup as natural and culturally accepted as a sensible way of spending your time and trying to earn a living as the old ‘jobs for life’ ethos that society has recently replaced with a (perhaps soon to be also discarded) ‘portfolio employment career’?

If this happened, starting a startup would become just a little bit more like buying a lottery ticket: from a social perspective, nobody would expect you to pin all your hopes on it solving all your problems, but nobody would think that doing it was out of the ordinary, or unreasonably foolish or impractical either.

This ticket is getting cheaper, the effort to get it is getting smaller, the prize is more than just ‘earning a living’ and buying a ticket doesn’t really stop you doing anything else afterwards (including getting another ticket).

In such circumstances, starting a startup would be a totally normal thing for just about anyone to be contemplating, and if you weren’t doing it, or you questioned why anyone else was doing it, you might even be expected to explain why you were even asking.

If the path to starting and succeeding in startups becomes gentle enough and the current preferred route to a earning a living begins to disappear, then one day, who knows, it is just possible that telling anyone that you’re thinking of embarking upon a non-startup career will sound just as weird and amusingly impractical as saying ‘I’m seriously contemplating just doing everything offline’.

If startup facilitation factors become much more pervasive and productive than they are today and the job market starts to shrink dramatically and systemically as some suspect it might, then the number of employable individuals starting work in startups may overtake the number of new (non-startup) job positions filled.

The next question will be: but will ‘working on startups’ make enough money to feed us as well as non-startup jobs used to?

This may be an academic question if the ‘conventional’ jobs that we’d like to be able to go back to (‘as a backup option’) are simply no longer there.

Why not bake augmented reality into your hardware startup?

The next big thing in innovation : Recursive Resource Reduction

Is healthcare data just a game?