> Technology > Is the ‘point’ of solar about to change? 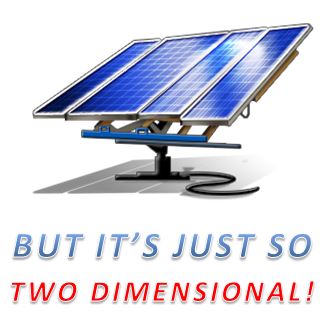 Whilst panels were expensive, titling an array of flat rectangles towards the sun was the most economical way to gather light. Much cheaper panels may make this approach obsolete.

At no time on a sunny day is there at least one side of a solar pyramid which is not bearing the full brunt of the sun’s rays (it turns out that it’s the shape and size of the shadow that one pyramid casts upon another at different daily solar elevations that is the thing which determines exactly how to lay such ‘photovoltaic polyhedra’ out in a field).

Pyramids are a very uneconomical arrangement if panels are as expensive as they have been up until now, because you are essentially having to put additional panels ‘on the back and sides’ of an installation, instead of just on the front.

Tilting is always preferable to completely horizontal arrays due to problems associated with rain as well as with build-ups from airborne deposits which all reduce the panel’s light gathering capabilities, but up until now the wisdom has been that the tilting of photo-electric panels should be unidirectional.

So, has anyone crunched the numbers (i.e., run a simulator) for the cheap panels that we know are on their way soon?

If, as expected the panels soon become cheaper than the structures upon which they are installed, can anyone say what the optimal geometry of a ground-based structure would be for using solar panels to capture light most economically?

I wouldn’t be at all surprised if it was less like the current ‘desktop PC monitor style’ configuration and more like a field of small tetrahedra.