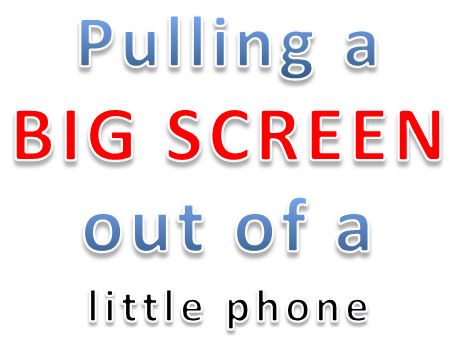 At first sight, it looks as if we already had the technology years ago…

We saw a display screen in 2010 that was so flexible, you could wrap it around a pencil and then unfurl it and be able to read it or watch a video playing on it.

So why are we still waiting?

This kind of flexibility is exactly what is needed to allow us to pull a big screen from a little phone, just like the one in the legendary concept video below.

But if a display like that is going to be useful on a phone, it probably needs to be made to stay as flat as it was in that concept video while we read it. If you want to see what that kind of display would look like if it wasn’t made to stay flat, watch the next video.

And if that kind of display is going to be an integral part of something that receives the same kind of treatment that a phone gets, it probably shouldn’t be any more easy to damage than a conventional phone (and in the video above, the flexible display sticking out looks like it wasn’t really meant to demonstrate anything more than the fact that they could make a flexible display which was that big and that flexible).

If you can make a rollable display pop-out (and also able to be popped back into the phone, or at least be able to be pulled out and pushed back in) you are going to need to overcome some very serious engineering challenges which have less to do with the display material itself than with the mechanics of the ‘roll-out process’

You are going to need to make the ‘supporting scaffold’  that sits behind the unrolled screen:

You are also going to need to make that soft, flexible screen surface able to withstand typical phone usage wear: on a phone this is an absolute deal-breaker if you can’t do it and in this case, super-toughened glass can’t help you.

As far as I know, these problems are the reason why the only examples you have ever seen of these kinds of phones were created using CGI in concept videos, like the more recent one below.

By the way, as far as I know, none of the impressive hands-on demos (as opposed to concept videos) of bendable screens are actual touch screens: has anyone seen or used a bendy one that’s a flexible touch screen?

Here’s an announcement of a technology that does it, but it sounds like it is still a way off.

Will we only be prepared to accept phones that are ‘floppy’ (for example, if the rigidity and fragility issues above have not been fully solved) once they’ve become cheap enough to throw away, so that we won’t care if we damage them? (although something tells me that smartphone disposability is at least a bit further off than any of the technological advances we are considering here).

And so we come to the competing players in the ‘making extensible displays’ game.

I have nothing to offer but questions, but these are some key ones that will need to be answered if you want to gain any insight into the future of extensible phone displays.

Will resolution issues on extensible displays be initially addressed by phones which have two displays, one high res and non-extensible (on the front of the phone) the other lower res and extensible?

How big does a phone/tablet display need to be in order for extensibility to be the preferred solution?

Is this more of a tablet thing than a phone thing?

Will the size-extensibility thing be more satisfactorily addressed by ‘foldable phones’ rather than roll-out displays?

Solving this one is probably the game-changer: maybe it will turn out that is impossible to make that extensible scaffold work well as well as it seems to work in the concept videos.

Making folding extensible display phones durable will be much less of a big deal engineering-wise than it is with rollout displays unless you make the phone need more than one ‘fold’. See below for other folding issues.

Will rollable displays ever be able to be touchscreens? If this problem has already been cracked, we should expect to see results soon.

If progress on touch holds everything else up on the flexible-extensible screen front, will the solution to this one be the same sort of thing as the one which addresses the resolution issue?

In the case of ‘rollout screens not being touchscreens’ this would require one phone-sized ‘front of phone’ display that is a touchscreen, and the extensible one would not be a touch screen (but it would still be ‘interactable with’ by capacitive buttons on the body of the phone.

Back to that science fiction?

In order to avoid the need for a scaffold, maybe the material itself would need to be able to become rigid through an electrochemical effect: this could make it ‘unfurl itself’ like an ‘uncoiling’ and then stiffen completely when flat, and then, when you want to close it, the material would ‘soften’ (but probably do this in a way which allows it to ‘gracefully go back in’ rather than ‘just going floppy’). Is this a ‘shape memory‘ requirement?

If we want to delve further into the realms of the unearthly, I can imagine an extensible material which doesn’t roll out: stretchable displays anyone? (oh, and we would obviously still need to deal with the ‘rigidity transformation issue’ to keep the stretched material flat enough to read once the display has been stretched to its intended width? I suspect the ‘shrink back down into the phone – un-stretch’ would be a creepy-looking wonder to watch, never ceasing to amaze and delight).

Extensibility is much, much easier to achieve by folding than it is by rolling out, but it poses its own problems.

The comparative advantages of folding:

Rigidity: a foldable display (although not as durable a single panel, non-folding phone) doesn’t have anything resembling the rigidity and robustness problems of rollout displays

All other screen performance factors: size, touch and resolution problems are all already addressed by the folding phone’s individual panels (assuming, of course that you aren’t using flexible material to do the folding) which don’t need to be different to those in non-extensible displays, except…

The comparative disadvantages of folding:

The thickness of a rollout display-based phone is more dependent upon the diameter of the rolled-up screen ‘spool’ (i.e., the ‘spindle’ with the rolled-up display wrapped around it) than anything else (a factor which both drives and is driven by the extent to which the flexible display material can withstand being rolled up tightly enough to keep the roll diameter from making the phone unattractively thick: this may also be an example where this kind of issue may matter to a different extent on phones rather than tablets).

Which will come first: foldable or pop-out/pull out?

Will we really have to wait until disposability is a reality before rollable arrives?

I wouldn’t be surprised, simply because the rigidity, scaffold-support challenges and durability might just not be soluble: if they are, it will be as utterly mind-blowing as it looks in the videos (assuming they sort out touch, of course, although it will still look mind-blowing even if they don’t).

How far off are disposable smartphones?

Why disposable so soon?

We’re already beginning to run out of seriously expensive new features to add to phones: at some point offering increased processing power and higher phone network speeds may not be enough to prop up the price of anything but top end models for even a year per ‘generation’: advances in display technology are the only other eye-catching game in town.

Initially such things as multiple-panel-folders will inevitably be much more expensive (a high-end panel is easily the most expensive part of the phone) but because panels are a kind of Moore’s law item, that state of affairs won’t last long either.

The sheer volume of units involved makes the pace of commodification of phone technology unprecedentedly fast.

How much will disposable phones cost?

They will still be one of the most expensive disposable things you can buy (I’d guess at the low tens of dollars, about the same price as the cheapest ‘feature-phones’ are today) so they will definitely need at least some durability, but just a great deal less than the kind of robustness that we’d expect from a smartphone that we wouldn’t expect to need to replace until it came to near the end of a one or two year contract.

For all other aspects other than the lack of durability of the display, the extent to which a disposable phone ‘needs to be treated as being disposable’ is probably ‘just a marketing thing’ and careful handling may preserve the phone in use up until some other factor eventually renders it obsolete, such as network incompatibility, or the availability of an even cheaper later, higher specification ‘disposable’ phone.

Why would anyone really want a disposable phone if the price isn’t close to zero?

Well, perhaps because some of the trade offs that need to be made in terms of durability can be made in order to reap the benefits of screen extensibility.

The rationale would probably need to go like this: “The price you pay for having a phone with a large pop-out screen is the cost of having to replace it every few months”.

What if only the display part of the phone needs to be disposable?

Maybe this might even mean that ‘the extensible display’ turns into a ‘consumable’: you buy one, non-disposable phone, with a rollable display unit that ‘snaps in’ as a ‘module’.

You know you will wear out the comparatively less resilient rollable display long before the phone itself needs replacing, so you buy a spare display unit or two and perhaps even carry one around with you just in case.

My own feeling is that even if this’modular option’ comes into existence, it would probably a bit of a gimmick, simply because by the time disposability is on the smartphone horizon, the rest of the phone would quite possibly be cheaper to make than the display (although as high-end phone CPU speeds and 5G costs may not be fully stabilised enough to be commoditised for a few more years, there is probably a ‘window of opportunity’ for extensible displays to be a modularity issue).

Why all this fuss over rollable displays, if foldable ones are more practical?

I really want something which did what I saw in the videos.

So what is likely to be the first application of flexible display technology, if rollable is delayed?

Well, ironically, it might not actually be anything to do with its flexibility, but the fact that flexible display technology ‘goes all the way to the very edge of its surface area’ in the way that other displays need a ‘bezel’ that ‘frames’ the edge of the display.

I call this ‘bezellessness’ and having it will make a phone look strikingly ‘different’ (I was gong to say ‘edgy’ but in this case that is obviously the precise opposite of how it will look: in reality, it will be in some senses ‘edge-less’).

This would be exactly that sort of thing which would have strongly appealed to Steve Jobs, so you can guess where I expect it to turn up.