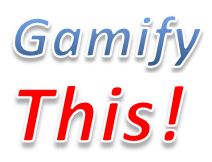 Using the dynamics of games as a way of improving engagement in such things as work, marketing and education shows great promise, but something relevant that gamers do is being ignored

This ‘elephant in the room’ of gaming activity that seems conspicuous by its absence from gamification practice has been called ‘affinity space’.

It’s where dedicated gamers ‘gamify themselves’ into doing (directly relevant and perhaps surprisingly intensive) things together other than ‘just playing the game’.

Video gamers rely intensively upon developing and using ‘tacit knowledge’ to play a game, knowledge which contains a wealth of ‘unexpressed experiences, phenomena and capabilities’.

Affinity space is the place where all that tacit knowledge can be made explicit, where the in-game experiences can be described, where relevant insight, capabilities and skills can be shared, debated and imparted within a ‘community of interest’.

If you’ve never seen any game affinity spaces and want to understand how they work, you could do worse than to start by imagining an instruction manual for a game, which restricts itself to just describing the rules of the game.

A game’s affinity space begins where the practical scope of any conventional instruction manual (and the game itself) leaves off.

Imagine that there was a felt demand for the instruction manual to be extended to include all the intricate details of the imaginary world where that game takes place, a sort of ‘game world encyclopedia’.

But if the game is very sophisticated and has millions of players and all the players contribute to interactively constructing and shaping that world as an intrinsic part of the game-playing process, the game world encyclopaedia essentially becomes both infinite in scope and complexity and is also constantly changing.

This makes it potentially impractical (not to mention uneconomical) for the publishers of the game to even try to keep the encyclopedia up to date.

However, if the game world encyclopaedia is ‘crowdsourced’ and the job of maintaining it is voluntarily undertaken by at least some of the game’s players, then the problem of maintaining it stops being a problem for anybody and instead begins to take on a life of its own.

In fact, in the game’s affinity space, the job of building and maintaining this ‘shared knowledge base’ becomes less of a job, and in some ways becomes a certain kind of game in itself.

The environments where such mammoth encyclopaedic endeavours are taking place are basically online community venues (essentially message boards, or in some cases Facebook-like social media networks)  but unlike the game itself, they are not necessarily (and are often not) owned or hosted by the publishers of the games in question.

In his talk about affinity spaces, renowned educational psychologist James Paul Gee focuses on the learning processes that are taking place in such environments.

From a gamification perspective, however, there are probably some different issues that need to be explored.

In a sense, affinity spaces are separate ‘fan spaces’ where the explicit game dynamics of levelling and scoring are being ‘left behind’ and gamers participating in the space are ‘taking a break from the game’, and being, at least temporarily, relieved from its pressures and acting out a role as ‘fans’ rather than participants (although, in practice, it’s more than likely that many affinity space contributors are actually playing the game at the same time).

The affinity space is a place to ‘let off steam’, ‘be yourself’ and ‘chill out’.

This ‘participant role’ vs. ‘fan role’ contrast which characterises the ‘game vs. affinity space’ dynamic  probably introduces a potential ‘parallel world’ aspect to the affinity space, where such things as ‘independence from the confines of the game itself’ and a sense of ‘a more relaxed, less rule-constrained environment’ becomes an essential feature.

In ‘gamification as we know it’, we introduce game dynamics to non-game activities, in order to improve engagement in the activity in question.

Do we now need to consider whether and how to introduce (or at least take steps to encourage the emergence of independent) affinity spaces into our gamification approach?

What would we hope to gain from doing that?

What are video games turning us into?